Shoot the bubbles (there they are :O)

Controls are as follows:

Press Left and Right to move left and right

Click the icon in the top right corner to go fullscreen.

This is my entry for the Learn Something New Game Jam. I made this game to learn the Kotlin Programming Language, using kotlin-phaser at https://github.com/hiperbou/kotlin-phaser.

I also have never made a Pang type game before (if you've never heard of Pang, look it up, its a fun game). Hope you enjoy the game and thanks for looking!

This is my favourite pang-type-game.

This was good fun! I only had time to do one play, but I got up to level 11 or so. Enjoyed what I saw!

There could have been some changes made with some things. The game doesn't really get anymore difficult as it continues, so you could just go forever at this point. Additionally the powerup pickups can fall onto the floating platforms, making them impossible to get. It'd probably have been a good idea to allow powerups to fall through those platforms.

Other than that, good stuff!

I've never heard of Kotlin before (relatively new to programming), is it an easy language to get into? Why did you choose that one?

Hey, thanks for playing and for your helpful comments. I'm glad you enjoyed it! also thanks for highlighting some of the issues with the game as its always good to get some constructive criticism. Kotlin is a new language based on Java, which is a language which I never really warmed to because of its flaws, Kotlin manages to rectify most of them and it is quite easy to learn, if you know any Java then its even easier to pick up.

It also compiles to javascript which means I can target the web. The only lacking feature id say is its lack of libraries atm because its quite new. I wanted to learn a new language with web support at the time of the jam so it was either Kotlin or Typescript. I think either are good languages to learn for web stuff but the added benefit of using Kotlin is it works with Mobile and Desktop via the Java VM and theyre also working on a Native compiler for it so you can run natively without the JVM.

Edit: Oh I shouldve mentioned I used the phaser library with Kotlin, which can also be used with javascript or typescript and it makes it very easy to make games, if you want to check it out its at https://phaser.io/ 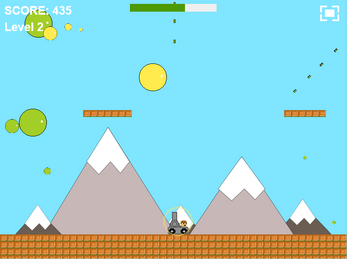